A test to see if Booklikes is really a viable website, or just a pipe dream of numerous Goodreads ex-pats.
279 BOOKS

Book review: Smash - Trial by Fire, by Chris A. and Kyle Bolton

Just received a copy of this book in the mail from the giveaway I was lucky enough to win here on Booklikes.

Smash: Trial By Fire was a quick read for me, as it is basically a graphic novel, but it was also a pretty good one. It is your standard boy-becomes-superhero kind of tale, but there's enough realism to make it believable, and enough action and quirkiness to make it very enjoyable.

This is a good homage to the way comic books used to be made, without all the modern, photo-realistic trappings, when artists could be artists and not photographers. The Boltons can use the medium to tell a proper story, something deficient in many today.

I'd definitely recommend anyone who likes comics to give this one a try, as it is a fine comic book tale!

A fun entry into the Doc Savage pulp series, this is another from the last part of the illustrious adventurer's published career, in which he was portrayed as a more normal, more fallible man. That's well and good, but unfortunately the author also was a bit fallible, pulling together all the plot points at the end a little too quickly and even forgetting to address the situation of the lone female character, a high-stakes gambler who might've made a good occasional foil/sidekick if that sort of thing would've been allowed back in the forties. Still, it was an enjoyable read, just not on a par with the best Doc Savage adventures.
Tweet

There's not much to say about this book - it tries to be a serial killer story, but the editing, proofreading, phraseology, formatting and style is just so lacking, that it isn't much of anything besides fodder for headaches.
Tweet I had such high hopes for this book, considering it is fairly rare for any Charlton Comic book to be reprinted, much less the majority of a whole series. But this book is nothing but a COMPLETE disappointment. "Remastering" to this "author" apparently means rewriting classic stories and imposing his own captions and dialogue. That's defacement and desecration in my book.The people who would buy this book, the ones who want to read these old Space: 1999 stories want to read the stories as we remember them, not as someone with a Wade Williams complex has "improved" them. If you're not printing those original stories, why bother? This also does a HUGE disservice to the original writers, Nicola Cuti and John Byrne, since it's basically saying that they didn't write well enough back then, so it's got to be updated for today's audience. Guess what? Cuti and Byrne are both legends in the industry and are still going strong, and their stories stand up today quite well, thank you kindly. If you wanted a proper reprint of Charlton's Space: 1999 series, this is NOT the book you want to buy. Go spend your money on the original comics and magazines and get the real deal, not this travesty in four colors!
Tweet

Truth in advertising - this book gives you the history behind the adopter, and the man who took the credit, for the original postage stamp. If you like history or the post office (particularly the history of the British post office), then this is a good book for you.
Tweet While nowhere near as good as James Blish's Trek adaptations, the tales in this first log do manage to expand a bit on the limited stories of the animated series, though most of the Enterprise crew walks in and out of character as they please. These stories were dated when they were broadcast, much less when they were adapted.
Tweet The last book in Brian Daley's Han Solo Adventures series is about on the par with the rest of the series, and most of the "expanded universe" stories up until that time. A quick read, a fairly good space opera tale, and move on to the next. Nothing resembling high literature here ... just good pulpy adventure.
Tweet It is way too bad that Jim Valentino descended into the quagmire of Image Comics the way he did, because Normalman the Novel stands as a true comic book classic, and a rare parody/satire that fires on all cylinders. To think he went from something as enjoyable to read as this to the dreck of Shadowhawk is a crime against art. Call it homage, pastiche, parody; no matter what you call it, read it! If you are a comic book fan who lived through the Bronze Age and the opening volleys of the "modern" age of comics, this is a story that you won't want to miss!
Tweet I've considered Solaris one of the best science fiction novels ever written, as it is really one of the few that addresses a major concept overlooked by many (communication between humans and aliens). The book may seem a little drawn out to many, as it was written by a Polish/Eastern Bloc writer. Stanislaw Lem is an interesting artist, but he doesn't write with the space opera ease you'll find in most Western novels. It's one of the few science fiction novels that I would say could qualify for that snobbish category of "literary fiction". The original 1972 movie is also great. The remake with George Clooney is surprisingly true to the book, though the ending tends to take after the original movie rather than the novel. Both are worth watching, and I think reading Solaris can be a rewarding experience for the science fiction aficionado.
Tweet Good adaptation of the cult movie. It provides a little helpful background info about the main characters that is quite welcome.
Tweet Rather disappointing and disjointed...the writer tries too hard to adapt too many episodes into one book; there's no plot element carryover between the vignettes. The story is rather dated and dull as well, and the author doesn't seem to want to bother with clear descriptions, characterization or anything else. More Tom Swift Jr. in style than proper sci-fi.
Tweet 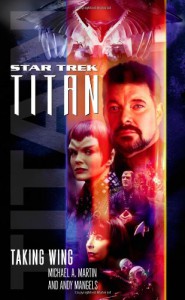 A very well-written Star Trek novel, set after the events of the movie Nemesis and putting Will Riker in the captain's seat for the first time on his own ship. The Titan is a ship with the most racially diverse crew in Starfleet history, and set to explore uncharted space. Instead, it gets drawn into a diplomatic intrigue between the Romulans and Remans. Guest-stars include characters from Voyager, other novels, and even the original Trek series. Highly recommended!
Tweet

I didn't quite know what to expect with JT Sather's new book. I know JT through Facebook, and he's kinda goofy. But I have to say I enjoyed How to Survive When the Bottom Drops Out. It was a pleasant surprise. I've read these types of pseudo-memoirs and they seem to want to center on how the person is such a "playah" more than anything else. While JT stakes his claims in that territory at times, there's a much deeper verve to this book than just notches on a bedpost. The story is part-self-help book, part-dramedy, and part-memoir. JT's a good writer. I don't necessarily agree with everything he says here or what he's done over the years (putting the proverbial tongue-in-cheek and taking that grain of salt in hand when considering what might have been real and what is pure conjecture in the book), but he makes some salient points that everyone can take heed from. I think the last two chapters are the most important: "Get a Life" and "How Not to Be an Asshole". Definitely worth reading.
Tweet Excellent adventure of the Shadow! The man in black faces off against a sly criminal doctor with an affectation for the Orient and a love of money and murder. Well-written and staged, there's a lot of action and twists in this one. Definitely a bit dated, but a very fun read.
Tweet Excellent book on crystals for someone who's interested or someone like me who doesn't know a bloody thing about them. Good info and especially good advice on using them. There's also an important section on crystals that can be toxic to humans and animals. Very useful!
Tweet
next »